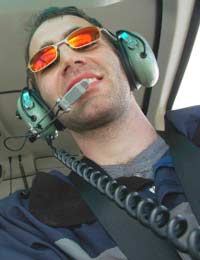 When a flying instructor feels confident in a student pilots flying abilities, and that he or she are safe to fly solo, they will suggest to that student pilot to take the cross-country flight test.

Once the cross-country flight test has been successfully completed the student pilot will then receive the necessary refresher training to prepare them for the final skills test.

A student pilot applying for the Private Pilots Licence (Aircraft), PPL (A), must complete 10 hours of supervised solo flight time in an appropriate type of Aeroplane and 5 of these hours must be solo cross-country flight time.

One of these cross-country flights, to be considered as the qualifying cross-country test, should cover a distance of at least 150nm (270km) and make two full stop landings at two other aerodromes that are different from the aerodrome of departure. This flight is to be treated as one flight and must be completed on the same day. Flights taking more than one day are not valid for this part of the test.

Don't forget to go to the control tower at each of the two intermediate aerodromes and get your documents signed to confirm that you arrived at that aerodrome and that you made a "good" landing!

This test is carried out by a CAA approved examiner and is the one flying examination that can be taken only when everything else on the training course has been completed.

Your flight training school will give you a list of the task to be demonstrated on the skills test and they will also carry out practise test to pick up on any points that need refining.A student pilot should feel relaxed on this test as there is no difference between it and the training they have previously completed and practiced, so why not enjoy this event!

The CAA has issued some excellent notes about the PPL skills test and these are currently listed in six major sections, which in turn have sub sections that give more details on what needs to be demonstrated by the student pilot during the test.

The major sections are:

The CAA website contains very useful notes on the flying skills test for use by applicants of the PPL as well as the examiners. There are many other notes and useful CAA publications to be found on this site and it is well worth taking some time to check it out.

Both the qualifying cross country flight test and the flying skills test should not only be considered a challenge but also great fun to take part in. These two test are a major milestone in obtaining your PPL and they will probably bring a smile to your face whenever you think about them during your future years of flying.