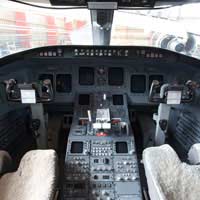 A complete glossary of all aviation terms is beyond the remit of this site. However you will find here all of the aviation terms you are likely to encounter as you start to fly.

Aerodrome Flight Information Service Operator. A type of air traffic controller who is authorised to give information but not instruction

Fixed to the wing tip, this moving aerofoil is there to allow the areoplane to turn left or right.

An aneroid barometer instrument calibrated to indicate height above a given datum. Can be set to give height above ground, altitude (height above sea level) or a flight level in accordance with the International standard pressure setting.

Height of Aircraft above sea level - this is not the same as height above the ground!

The master instrument, operated by gyroscope to give the pilot information about aircraft attitude - essential when flying in poor visibility or at night.

Certificate of Airworthiness (refers to the aircraft not the pilot!)

The curvature of the surface of an aerofoil that causes lift

The point in the aircraft through which the sum of the weights of the parts which make up the aircraft may be assumed to pass whatever the attitude of the aircraft. This will become very important when you start making calculations to carry passengers.

May be yoke or stick type, operates the ailerons and elevator

The total resistance of an aeroplane along its line of flight

Flight and flight time recorded when under instruction

Control surface hinged to the trailing edge of the tailplane to provide longitudinal control. Movement of the tail plane causes the aircraft to climb or descend

A hinged surface, usually at the trailing edge of a wing, used to increase the lift of a wing at slow speeds, to steepen the glide and to act as an air brake during the approach and landing

The action of "holding the aircraft off", to reduce the descent rate, during landing

The shortest line joining two points on the earth's surface

The speed of an aeroplane relative to the earth's surface

The airspeed as shown by an airspeed indicator

An imaginary atmosphere that assumes at mean sea level a temperature of 15° C and a pressure of 1,013·2 millibars, and a fall in temperature of 6·5°C per 1,000m of increased height from sea level up to 11,000m, above which height the temperature is assumed constant at 56·5°C

A nautical unit of speed being equal to one nautical mile (6,080ft) per hour

The forward edge of a streamline body or aerofoil

The component in a vertical, upward direction in straight and level flight of the resultant force created by the relative wind acting on the lifting surfaces of an aeroplane

A method of construction in which the skin carries the whole or the greater part of the main loads. Most modern training aircraft are of a monocoque design

Navigator responsible for the navigation of the aircraft

Navigator acting under the supervision of the Pilot in Command

Identifying lights on an aircraft can be used to identify the presence of an aircraft and its direction of movement, especially at night. A complete set of navigation lights comprise a red light on the port wingtip, a green light on the starboard wingtip and a white light at the tail

Pilot in Command Under supervision

A tube with an open end, exposed to the airstream. This is part of an airspeed indicator.

The left side (looking forward) of the aircraft.

Sum of the drag caused by surface friction and pressure

The indicated reading on an altimeter when the subscale is set to 1013.2

True great circle bearing to an aircraft from a station

Normally hinged to the fin, this vertical moving surface is for directional management and blance of the aircraft.

Flight and Flight time recorded when unaccompanied by a supervising pilot

This is nothing to do with the engine! The wing of an aeroplane is said to stall when the smooth flow over the top surface breaks down and degenerates into turbulence. The amount of lift generated suddenly drops as does the wing. It is essential that pilot's learn how to recover from a spin.

Right-hand side of an aeroplane when looking forward.

Usuallyy set in the trailing edge of a control surface, a tab is a small hunged flap that is used to regulate the control surface. This regulation helps ensure the plane is properly trimmed when the controls are centralised.

The horizontal, fixed tail surface of a plane

A course followed across the surface of the earth by the centre of gravity of an aeroplane. This is not always the course set. The track is influenced by wind and pilot error.

This orientation instrument registers the variation of the route of a plane to right or left.

The distance at which objects may be clearly seen

Choosing and Joining a Flying Club