Home > Getting Started > History Of Flying 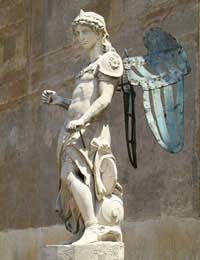 There is a tendency to believe that the history of flying starts with the Montgolfier Brothers in 1783 or perhaps the Wright Brothers in 1903. However, reference to flying can be found in much earlier times.

Perhaps the first reference we have to flight is in legend with tales of Pegasus the winged horse captured by the son of the King of Corinth to take him into battle with the Chimera.Ancient Greece also has tales of the flights of father and son Daedalus and Icarus who made wings of feathers and wax to escape from King Minos. That may be the first reference to a crash-landing - Icarus flew too close to the sun, the wax melted and he fell to his death.

Fable tells us that the King of Persia flew around his Kingdom with the help of four eagles that carried his throne. Alexander the Great allegedly had a similar idea only he used four Griffins and they carried him in a basket. But it was probably the Chinese, who were and are great kite flyers, who first started on a serious design for a flying machine. These designs were the inspiration for later efforts to build gliders, balloons and hang gliders.

It's not surprising that many of man's early attempts to fly were based on the way birds fly. Artificial wings were constructed, of all manner of lightweight materials, and attached to the arms of willing volunteers. Unfortunately, the anatomy of man is significantly different from that of a bird and the arms simply do not have sufficient muscle to support the whole body.

Alongside attempts to design an aerodynamic form that could stay in the air there were also efforts to build a power plant to propel the flying machine. Earliest references indicate that Hero of Alexandria, an ancient Greek, was conducting experiments with steam in his aerolipile that produced thrust.

On our History of Flying timeline the next notable name is probably Leonardo Da Vinci who, in the 1480s, produced hundreds of drawings to illustrate his theory on flight. Leonardo even designed a flying machine called the Ornithopter, which, whilst it was never built, did form the basis of the design for modern day helicopters.

Fast forward now to 1783 and Joseph and Jacques Montgolfier, who claim the first flight in their hot air balloon was for a sheep, a rooster and a duck. The first manned flight followed shortly afterwards when Jean Rozier and Francois Laurent got airborne in November of that same year. After this, in 1889, the first book on aerodynamics was published. This was written by Otto Lilienthal, a glider designer and engineer who dies in a glider crash.

A model aircraft called the 'aerodrome', which was complete with a steam driven engine flew for almost a mile in 1891. Designed by Samuel Langley, the flight of the model proved the concept of powered flight. Despite receiving a research grant of $50,000 Langley was never able to build a full size aerodrome that flew successfully.

Orville and Wilbur Wright dedicated their lives to the study of flight. They undertook very detailed research and experimented and tested until they determined and understood the principles of flight as we know them to be today. Although Orville is credited with being the first man to fly, it could have been either brother as they took turns to test their inventions. It just so happened that Orville was at the controls on the day the 'Flyer' travelled through the air for 120 yards.

There is no doubt that this was the turning point in the history of flying. Many hundreds of years research conducted by many individuals culminated in a flight at the beginning of the twentieth century but it also lead to incredible developments in the world of aviation in the next 100 years.Within just a few short years of Orville taking his first flight, aircraft were being used in the First World War.

The Golden Age of Aviation

The golden age of aviation followed the 1914-1918 war. The first known professional female pilot was Blanche Stuart Scott, who was introduced to flying by Glenn Curtiss in 1910. Blanche's first claim to fame was as the first female driver to cross the USA from coast to coast and it was whilst she was making this journey that she caught the aviation bug.

Amy Johnson and Amelia Earhart are two names also synonymous with this era in aviation history. The early fighter pilots from WW1 became air show or barnstormer pilots putting on displays for the mesmerised public. This lead to the development of air shows and air races, air stunts and aerobatics - all in the name of entertainment. Amelia was an early barnstormer claiming her records as the first woman to cross both the Atlantic and the English Channel.

No history of flying would be complete without making mention of airships and dirigibles. In 1919 the first airship flew across the Atlantic and back again and these early flights lead to a round the world epic voyage undertaken by Graf Zeppelin in 1929. It was the fire aboard the Hindenburg in 1937 that precipitated the end of popular airship flight.

In 1930 Frank Whittle patented his design for the first jet-powered engine. With the rise of Nazi Germany and the inevitability of a Second World War, aviation developments took an exponential leap from 1930 - 1940 and it is certainly claimed that the war fought in the air had a great bearing on the final outcome in Europe and in the Pacific.

Since World War II the world of aviation has developed at an incredible pace. Military aircraft can stay airborne for months; we have sent a man to the moon and brought him back again. And, of course, there was Concorde.

As to the future of aviation, it's difficult to predict. There is still a love affair between man and flight; the romance of flying continues. Boeing and Airbus are the main manufacturers of modern day aircraft supported by many smaller niche market aircraft builders. The focus of most research now is on alternate fuels and more efficient power plants.

In some ways flying could now be considered to be just another mode of transport but it is more than that; man has defied gravity and that will never lose its mystical appeal.

Choosing and Joining a Flying Club