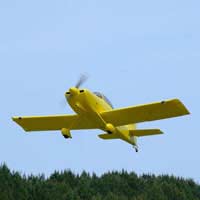 As the name suggests the wings on fixed wing aircraft do not move separately from the entire aircraft, to generate lift. Fixed wing includes powered aircraft and gliders.

All fixed wing aircraft have a number of common parts, although the design of these may vary to facilitate different types of flight. Some aircraft are built for speed, performance and manoeuvrability; others are built to be the workhorses of the sky, carrying large payloads.

All fixed wing aircraft will have:

Variations in the design of the wing enable different types of flight and this is why you will see many wing shapes. Even a commercial jet can change the overall aerodynamic shape of its wings to facilitate different stages of flight. Flaps can be deployed for take off and during periods of slow flight to increase the wing area and generate more lift. Additional degrees of flap are available to the pilot to reduce speed when landing. A variety of slots, slats and other devices can be fitted to wings to act as air brakes or to further extend the total useful aerodynamic area of the wing.

Landing gear wheels can be configured in a number of ways. Perhaps the most common type of landing gear is the tricycle formation with a wheel under the nose and the main rear wheels attached to each wing. Depending on the total weight of the aircraft these may be single or multiple wheels. Some aircraft are designed to be tail draggers or tail wheel types with the main gear being located under the wings but the steering wheel moved to the rear of the aircraft. The Spitfire is a classic example of a tail wheel configured landing gear.

Some modern experimental aircraft incorporate all manner of interesting landing gear designs - an example is the Europa, which has one large massive central wheel under the fuselage with two ancillary arms, one at each wing tip. Landing gear may be fixed or retractable. Training aircraft tend to have fixed gear as they are not performance aircraft and the additional drag caused by the wheels does not cause a problem. It is also one less thing for the student pilot to worry about. Aircraft that are built for speed, performance or to carry large payloads invariably have gear that will retract into the fuselage and wings during flight. Fixed wing aircraft need adequate runs for take off and landing that are clear of obstructions at either end.